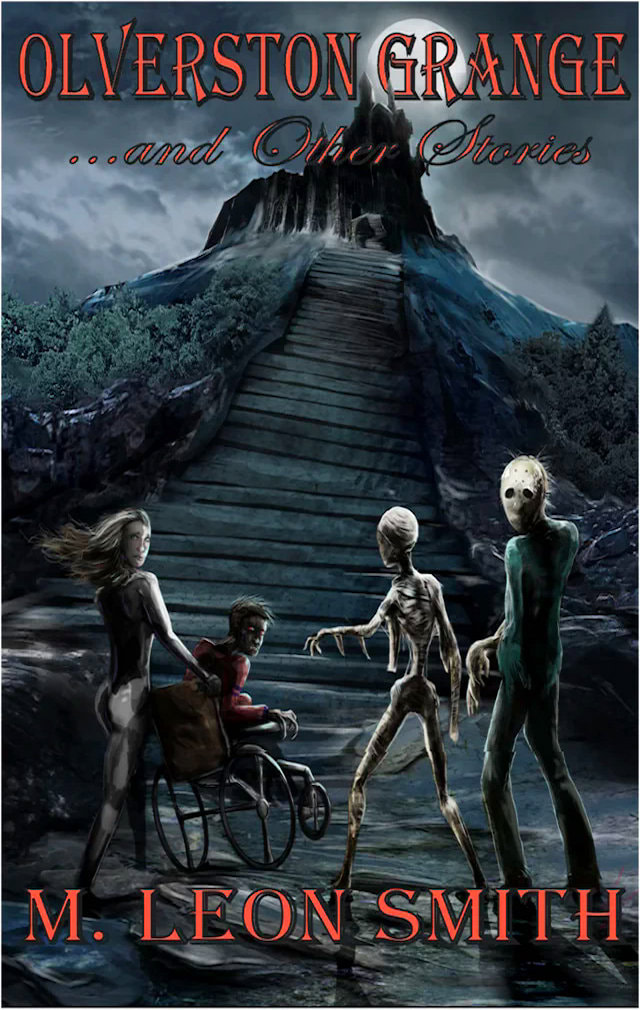 Olverston Grange ...and Other Stories

SKU:
£2.99
£2.99
Unavailable
per item
This anthology both scares you and pulls at your heartstrings in twenty-two eclectic stories by M. Leon Smith.

Dark short fiction fills "Olverston Grange ...and Other Stories" and takes the reader on unusual journeys with unexpected turns.

Tales of vampires and ghosts rub shoulders with more natural horrors and disturbing events in this exciting book.

​"Velcome to ze Vun-DRRRUSS!"
So begins a journey into a world filled with an exotic shopkeeper, mysterious items, magic, demons, and ancient arguments,.

'The droplets hit the metalwork above and disappeared into the darkness below.'
Bad weather beckons John to watch the rain. Why? And why does Angie join him?

"Oh no."
After a horrendous explosion, things becoming darker than imaginable, and reveal a hidden truth. What has happened Since New York?

"Robert fought temptation for so long but in the end he picked up the knife."
An undeniable deed. A witness. Caught.

'Luke chastised himself for being so jumpy.'
A trip back to his childhood haunts frees traumatic memories. Does anyone truly leave their past hurts behind?

'How did it get to be so long?'
The search for a missing person leads to violence and unhides a priceless gift.

'Devils approach and black waves slap the shore.'
Abandoned in the dark, a lone man must continued the mission.

'The gelid fire of panic blinded Ian's mind.'
An unknow injury robs a professional footballer of his mobility but is that the only issue?

"Please help!"
Armageddon has come. The dead kill the living and Dave tries to survive the end of everything.

'They never used to deliver...'
Addiction, regardless of the drug, strains every life touched by it.

'A rusty, blue Transit van, dented and scratch, followed him.'
The nightmare repeats and haunts Michael's every hour. It's just a dream, right?

'An impossible wolf blocked her path.'
A Grandmother in distress. A granddaughter rushing to help. A vicious wolf. NOT the story you're thinking of...

"I wrote that play with this pen. In his memory!"
A writer makes certain a critic learns a basic lesson.

A Quiet Night In

"You made a bad lifestyle choice, my young friend."
Sometimes getting everything you ever wanted has consequences. For Wren, sometimes refusing to go Trick or Treating can lead to a terrifying Halloween.

"All I do is reveal what the eye isn't allowed to view."
Some artists are pushed by a dark urge. Learn what motivates one of them - you may not survive to share the secret.

'Lungs expelled breaths in nervous gulps.'
Regardless of the problem, some people will never stop.

"Do you know why you are here yet?"
Stuck in a devious trap as punishment for the most heinous crime. Will Rich learn his lesson?

'Paul and Miriam Kaufman met the old-fashioned way.'
Love is love, right? And romance never changes... or does it?

"Where is your hope?"
Aged beyond explanation and responsible for all hurt and anguish, can Anesidora be forgiven? Does she deserve to be?

"The sword laughed a silent, sibilant laugh.'
A small life, marred by addiction, is changed by an ancient weapon. Are the changes for the best?

'Olverston Grange stood atop a bleak wind-batted hill in abandoned corner of Northumberland.'
A billionaire is entranced by the ancient building and vows to restore it. Wlill the secret it harbours stop his obsession?

A Moment In The Sun

'Sometimes, when the world goes quiet, I can remember my life before moving to Cedar Springs.'
This anthology ends with a heart-wrenching tale of age and lost times.